Check out the dark imaginings the writers over at Pen of the Damned have come up with for this photo! Damned Words 31 – A collection of dark flash fiction inspired by this photo

Pen of the Damned - where angst and horror flow freely... 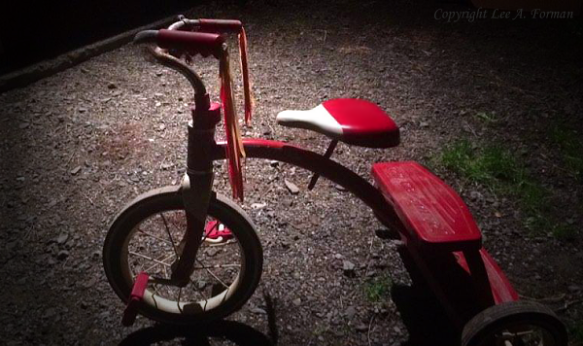 All I wanted was the shiny new tricycle with the ribbons on the handlebars. Just like the one Bobby next door had. So I wished it. At the scary place in woods where I’m not supposed to go. Where the growls and the bad words came out of the ground. Where the trees whispered about blood and mean things. I shouldn’t have done it, but I did.

I wished for that tricycle. Just like the one Bobby had. And they answered me. Said they’d get me that trike if I did something for them. So I brought them Bobby like they asked. I didn’t know what would happen. He just—just—there was a lot of blood and laughter. Then I ran.

But I swear I didn’t know.

I got my tricycle, though. Bobby’s parents gave me his, after the funeral.